Recently I was looking for a challenging tactical game to play. A game-savvy friend suggested we dive in the deep end and play Advanced Squad Leader (ASL). I said "sure" and started learning the rules.

Which is no easy feat. I'm still working on it months later.

After a few games and still having fun with it, I thought it might be worth offering my suggestions to the eternal question: "how do you learn to play ASL?"

I chose to dive straight into the full system rather than the ASL Starter Kit (ASLSK), but the starter kits may be exactly the right thing for you. Either way, my suggested resources will be relevant.

While my friend and I chose to go full ASL rules, we are flattening the learning curve by starting with just the infantry rules and playing just infantry scenarios. Later, as we gain confidence, we'll add ordnance and perhaps armor.

With that explanation out of the way, let's get to some of the learning and play aids I've found useful so far.

First, you're going to need some rules. I recommend the Electronic Advanced Squad Leader Rulebook (eASLRB). It's the full rules with all the latest errata incorporated in a searchable, indexed PDF. Rules references in the text link directly to the referenced rule. You can full-text search. As a new, learning player I'm constantly referencing the eASLRB and being able to quickly find the relevant term or rule has been extremely helpful. 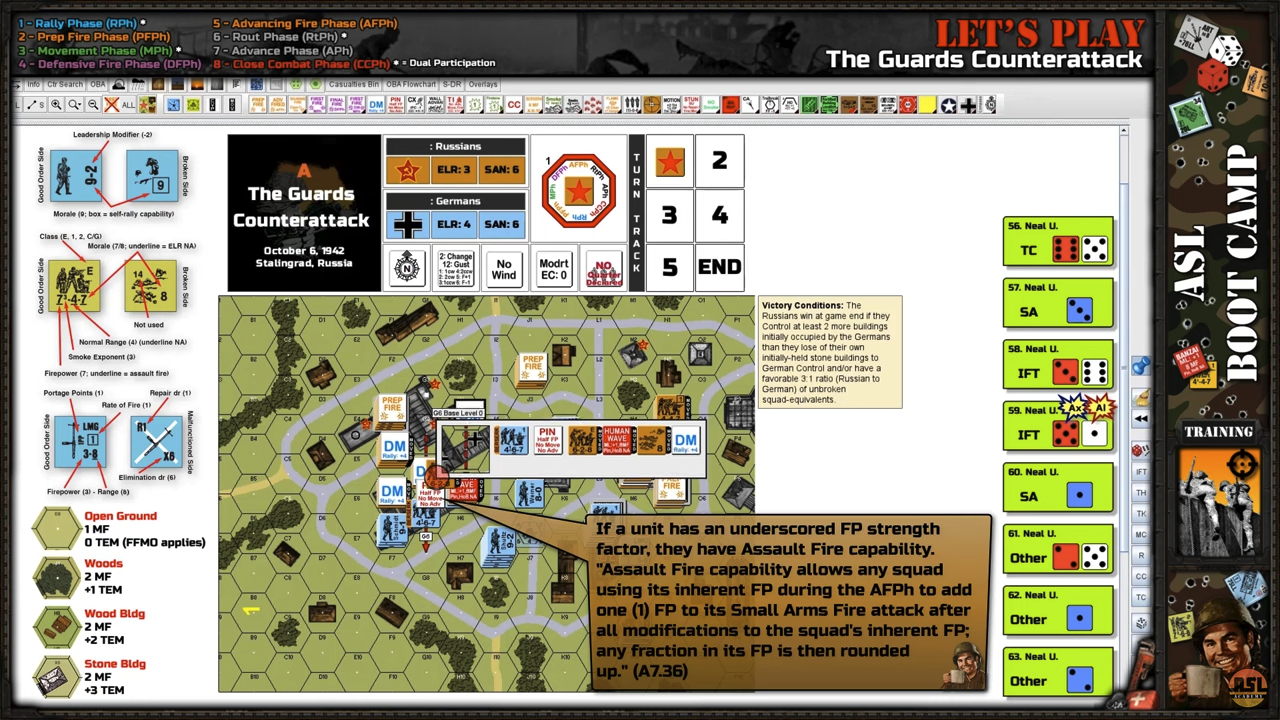 My suggestion for new new players is to read ASLRB chapters A and B without getting too caught up in the details. Just get the words in your head. Watch Neal's Boot Camp tutorials. Then go back and read chapter A more closely. Having seen the tutorials, the rules will make more sense.

The Texas ASL website has some great play aids under "Downloads", starting with the indispensable ASL Rules Summary by J. Yuzwalk. The turn phase breakdown here is something I refer to constantly.

Jay's ASLSK Tutorials are must-read resources for the new player. Jay really unlocked defensive fire in the movement phase for me.

From there I'd say start playing. I've alternated playing with my friend and playing solo games, referring back to the rules and play aids as necessary. I own several of the initial ASL modules including Beyond Valor module, but I mostly play on the computer using the Vassal hex game engine and VASL module for ASL. Neal has a terrific playlist of VASL 101 - Virtual Advanced Squad Leader Tutorials to help you get started.

You'll need some scenarios to play. I found the Advanced Squad Leader (ASL) Beginner Scenario List on the Itinerant Hobbyist blog, who credits the list from a poster on Boardgame Geek, via Gamesquad. I've seen this list on other sites as well. The beginner and infantry-only scenarios are a good place to start.

I hope this gets you on the way to playing Advanced Squad Leader. Have fun. Roll low.